WHAT HAPPENS NEXT? Stay tuned and wait. for. it.

Ok, so I had just gotten off of 128, and I wasn't going a thousand miles an hour, and there was no Stop 'n Shop, but there was a Wegman's. I threw RoadRunner on, because it's the very best song to finally break the 300,000 mile barrier on this rustbucket. Aaaaand, it didn't do it. Why yes, I am a sysadmin, why do you ask?

Just a bit further toward home though, I found a real Plymouth RoadRunner Superbird in a parking lot: 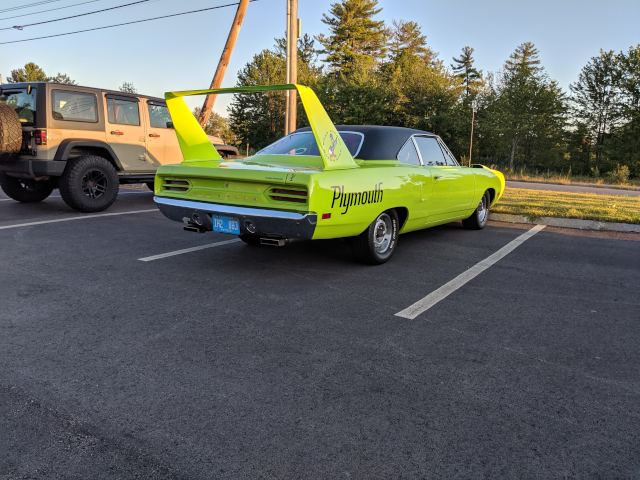 Natalie and I think it's this one right here.

So yeah apparently the odometer thing's A Thing with Toyotas from the mid-2000s. And they don't see it as a "design flaw" that every inspected car becomes illegal at 299,999 miles. It's like $500 to fix, apparently, which means it's still worth it to keep it on the road, but it is the second-costliest and absolutely the most pervasive and 100% predictable non-recall inspection-failing repair in this car's 14 year history. 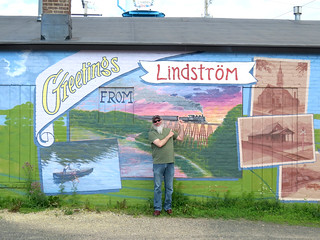 We're currently on a week-long road trip between Milwaukee and Minneapolis. Before we left, we mentioned our trip to Kari Lindstrom, proprietor of our favorite vintage and antique shop The Melamine Cup in Jaffrey, NH, and she mentioned there was a Lindstrom, Minnesota, so we decided we'd head up and see what's what.

So it was that at the end of a long day of Paisley Park, then the World's Largest Ball of Twine (as built by one man), we made our way for Little Sweden and made up there by around 4:00. Even still, we found a great antique store and got some fantastic handmade raised sugar and raspberry jelly donuts that took me straight back to when I was 4-5 years old getting donuts with my parents from a local bakery.

I did try really hard to get to The Sweet Swede to get something sweet for the sweetest Swede we know, but apparently it's not really a thing anymore. Fudge.

Natalie got some great pictures of this adorable vacation town: 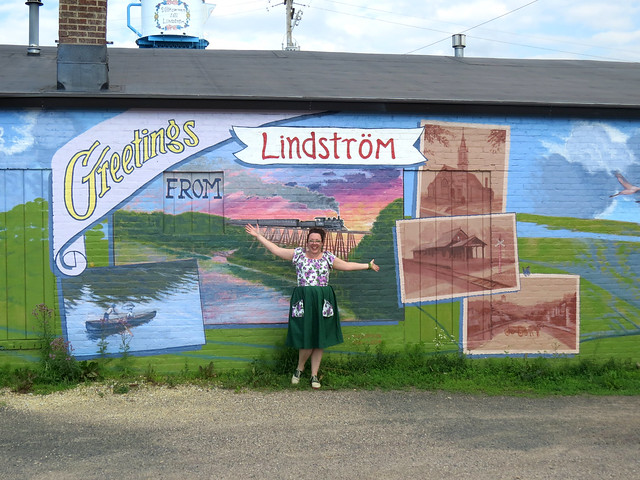 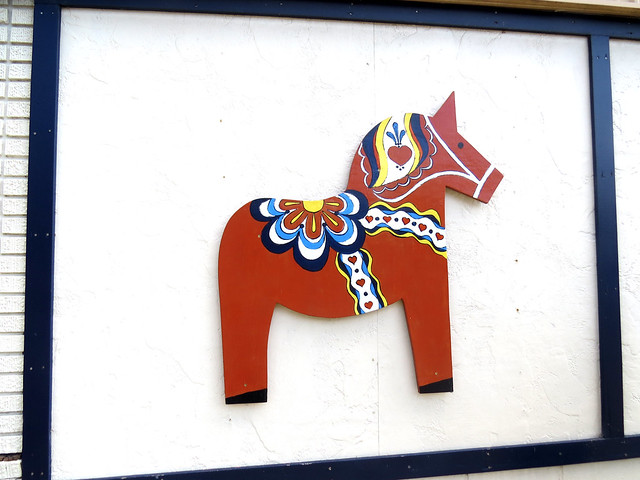 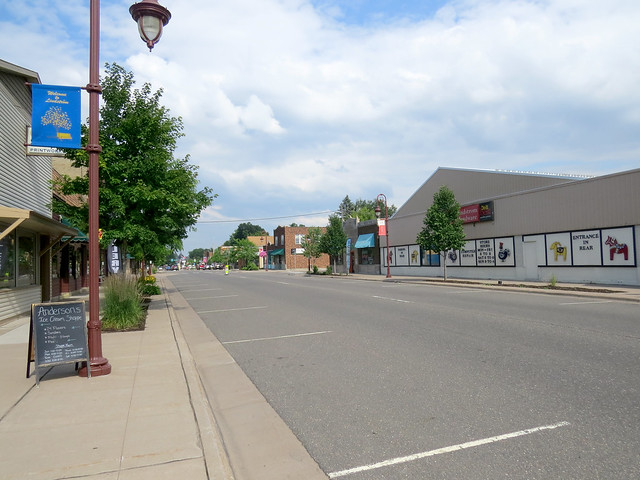 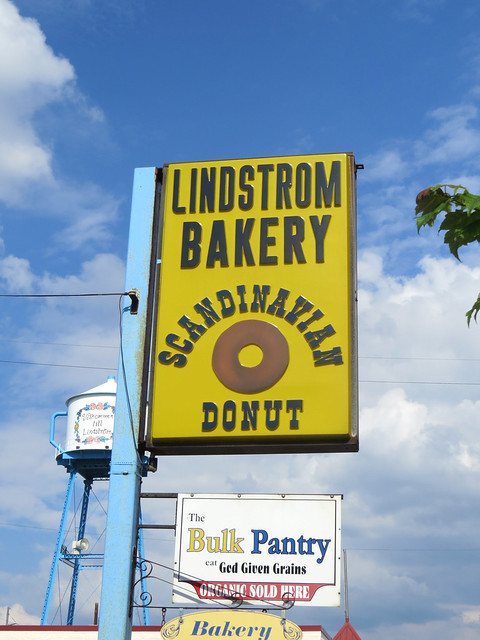 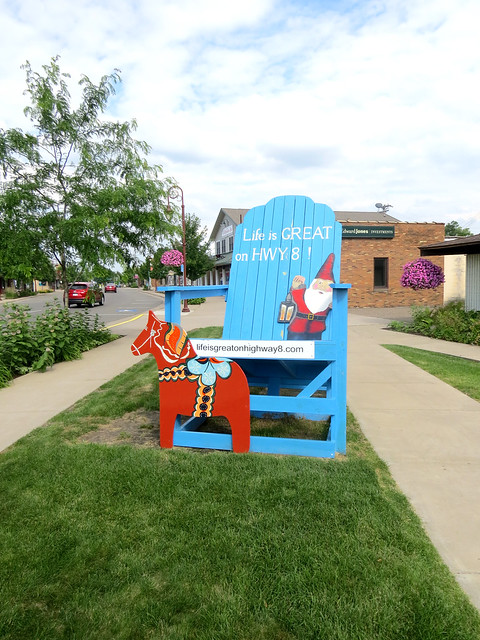 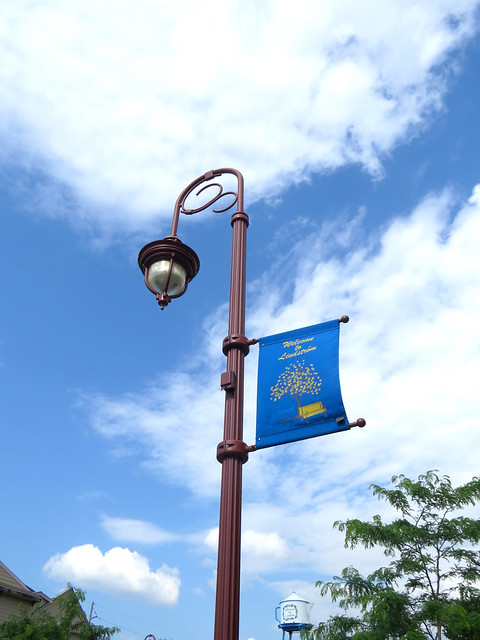 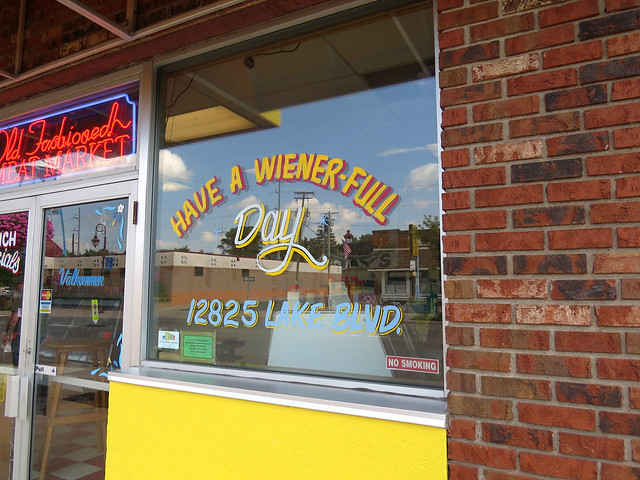 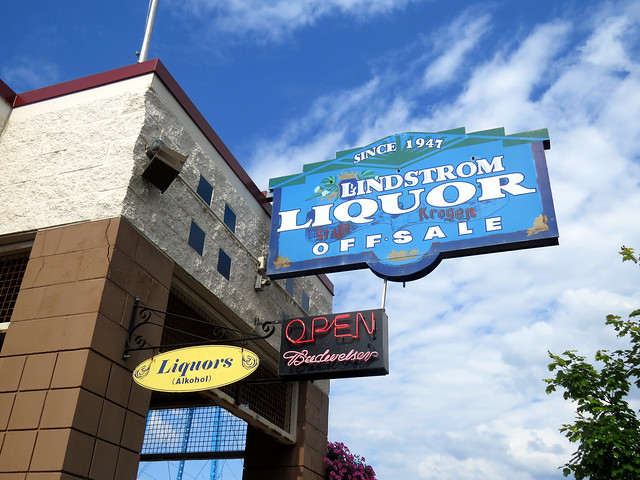 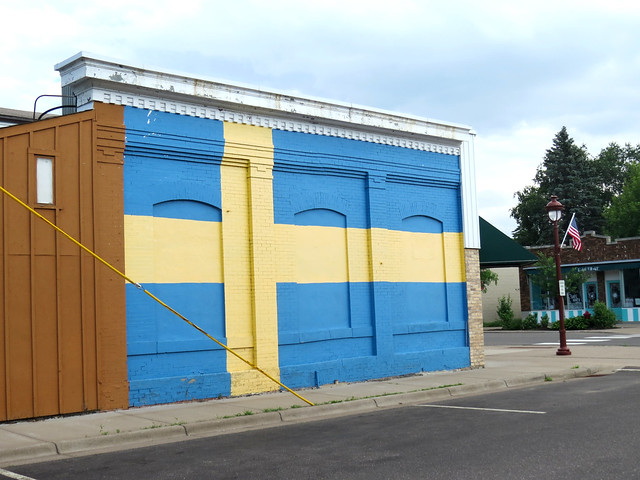 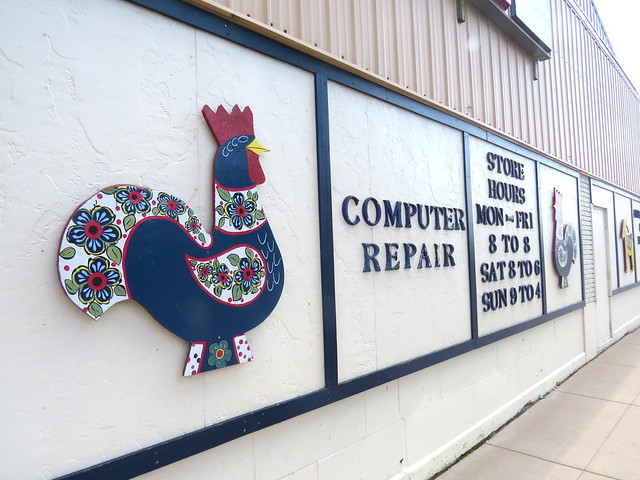 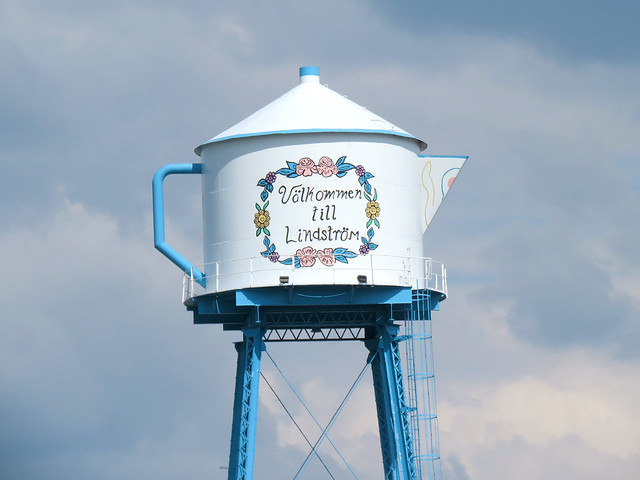 Natalie and I are on a kind of meta-road trip. We're not actually going to see The Thing, but we're seeing the roadside attractions which have sprung up around The Thing to amuse and draw in visitors.

Today we went to Roadside America, which is a massive O gauge model railroad layout. 6000 feet, assembled over 60 years of one Laurence Gieringer's life, from when he was 9 until he died.

Natalie took tons of photos, but I put up 3 short videos covering about 15% or so, along one short edge: As my first in a series of posts about ice cream places on NH Route 3, I'm deciding to count stuff which really wouldn't be super obvious, as well as all the multi-generational institutions we all know. Located a block off of Elm St in Manchester, Northeast Delta Dental Stadium counts, because I said it did.

We've been going to sport-thing games since last fall, when we decided we needed a release valve on the wall-to-wall presidential election nonsense and started going to Manchester Monarchs games. Since that nonsense continued straight past the election, we've been going to more and more games, including three Fisher Cats games this summer. The Fisher Cats finished up their season this weekend, so I wanted to make sure and head out there and get some ice cream and put it on the list.

The stadium serves Hood ice cream, soft-serve only from what we've seen, as well as novelties like ice cream sandwiches. This week Natalie and I each got a hot fudge sundae, vanilla & chocolate twist, with everything they'll put on a sundae, which boils down to whipped cream, jimmies and a cherry, I guess it's just easier for them not to even try to have a walnut in the building than to deal with the inevitable nut allergies.

You can get these in mini-helmets, of course. We got a regular cup this time because we did the helmet thing earlier in the season. This summer while we were out driving somewhere I decided that there should be a page for all the ice cream places on NH Route 3. Route 3 runs the entire length of the state from the Canadian border north of Pittsburg to the Massachusetts border at Nashua/Tyngsborough. The road runs through all of the larger cities in the state, and lots of pretty smaller towns. There's a lot of ice cream to be had here. I remember some of these spots from when I was a little kid, usually failing to get my mom to stop. Places like King Kone in Merrimack, and the Brick House in Hooksett.

This is going to take a good deal of time, and there's not really much summer left this year, but I'll be posting them as we can get to them.

So since the idea here is to visit these local institutions which have served generations of kids in this state, of course I'm going to kick it off with the biggest and newest one.

Geoguessr sometimes drops you in sites of historical significance, which I'll always take time to wander around. I've gotten Tulum, but also some smaller but no less impressive sites in the middle of the Yucatan. Anyway, this one's from India:

Hello in-laws. Yes, this is actually a thing which really happened. Sometimes I find nifty things in Geoguessr, so sometimes I'll post them.

Tonight I came upon Do-Mi-Ski in Dolbeau-Mistassini, Québec. It reminds me of Abenaki in Wolfeboro, with its one rope tow with $5 night skiing when I was a kid. We are ramping up to Viva Las Vegas 18, and Natalie has really killed this outfit. She made and then painted this skirt of the neon signs of old Vegas: 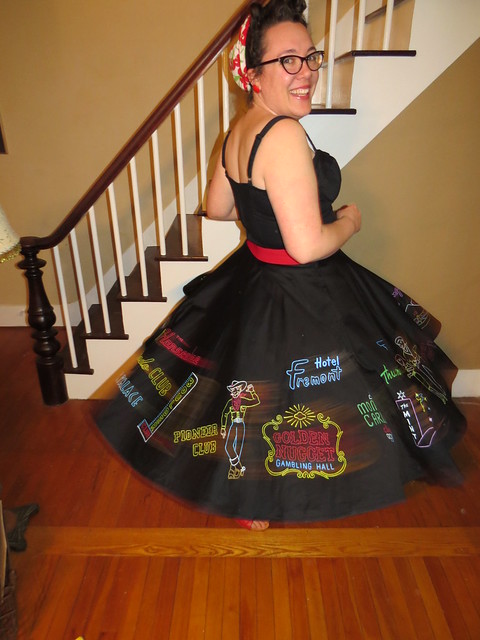 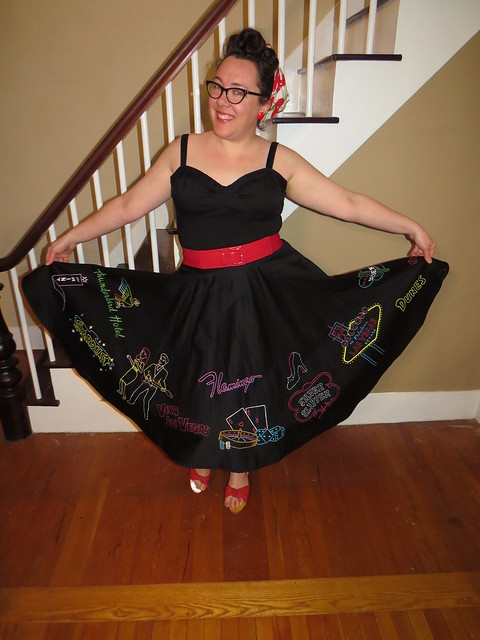 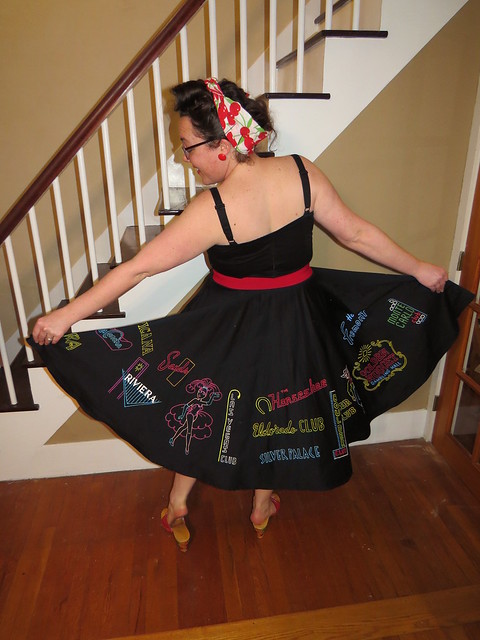 And, at the last minute, her brother came through with this TV prop jacket: 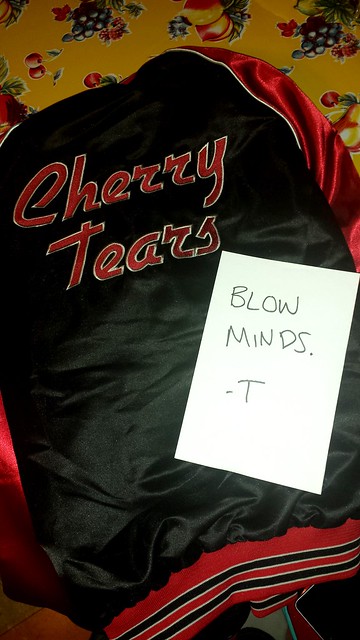 cndFlickr 3 years ago ago by Natalie Curtiss. 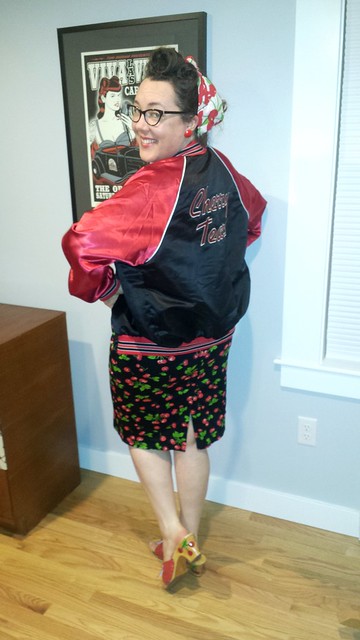 cndFlickr 3 years ago ago by Natalie Curtiss.

In which I am annoyed at the radio

"(Consumers are) getting their raise through the gas tank rather than their employers" - Sudeep Reddy, Marketplace

Sorry Kai, but yeah, that is a really weak statement. Between that quote last week, and all the stories about consumers already buying bigger more gas-guzzlin'er trucks and SUVs because pump prices have gone down, I just got annoyed enough to write this.

People don't really look at what's their ultimate best interest, they don't make math-based decisions. They think "Wow, gas just went down by 20%, so I can buy a car which uses 60% more fuel". Here is math:

At 90 miles/day, I drive somewhat more than the average person (78% of people have a less than 20 mile commute? DAMMIT). My 2005 Toyota gets a consistent 34MPG. Gas has gone down by 60 cents around these parts.

So what does that mean?

(So all this means that I pay $7.80 every day to sit in traffic for > 3 hours, before factoring in maintenance / wear & tear)

That means that the difference caused by this precipitous drop in prices is $5 per week, for me. That's not even enough for a pack of smokes. So much for people "getting their raise through the gas tank". $260 per year, thanks a bunch guys, but I'm better off with even a 1% pay increase. Even with the 20MPG Jeep that I had prior to the Toyota, it would still only be a $9/week difference. Not exactly enough to finance payments on a new SUV, let alone the fact that you now burn much more gas than is offset by the price decrease.

Being able to do arithmetic also accounts for why I don't drive a Prius or whatever. There's no way the increased milage would pay off over the facts that a Prius costs $10000 more (base) than I paid for the Corolla which is fully paid for. Even if I were to get a new car, it's unlikely the Prius speicfically would be worth the extra cost for the extra 14MPG, that's not even factoring in battery changes, which aren't cheap, and which I'm sure I'd have needed a couple of to match the 220,000 miles on my Corolla.

I don't pretend to know or care why people make the choices they do, but it's almost certainly more that they "feel" things are "good", and so decide to splurge on some new car, telling themselves that gas is cheap, so it doesn't matter.

People probably feel this way because of glib statements by people they perceive as being subject matter experts.